Fei began by teaching us a punching method, something we all thought we could master in no time.  After the first six months and many questions later, we were still doing punching.  However, we then realised that there was still a long way to go.  There is a lot more to punching than what meets the eyes.  It is a tool employed to change our bodies and challenge our minds.  Four years on and we are still doing punching.  However, people observing our group punch can see, hear and feel the difference in quality from what is generally regarded as punching.  Fei says that now our punch is what he calls a martial punch; it has martial force.  Many of the students in the advanced class with Fei have studied other martial arts.  They all realise the quality and depth of Fei’s knowledge and teachings.

Fei learnt his kung fu in China.  This type of training is referred to as an art.  It takes a lifetime to perfect.  Chinese martial arts are ultimately about the Tao or living a good quality life, one that is rich physically, mentally, philosophically and spiritually.  The arts are steeped in ancient Taoist and Buddhist wisdom.   Behind the physical movements is a wealth of philosophy, meditation, military strategy and traditional Chinese medical theories.  Because westerners have a different cultural reference, it takes time for them to fully appreciate the profundity of the art.  It is for this reason that most people never really understand Chinese martial arts.  Some people think of martial arts as something vulgar and base.  Many high level practitioners in China were scholars and their martial arts skills were only known to their peers. 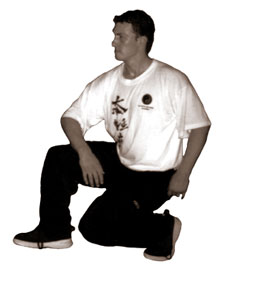 In traditional Chinese martial arts, there are no gradings or belts.  However, there are levels.  In our system, the first level comprises of chicken legs, punch and chop.  Passing the legs, that is walking for 15 min. with thighs parallel to the ground, is a basic and important level.  Building leg strength improves one’s health and is an essential foundation for martial arts.  For health, it strengthens the joints and muscles and builds stamina and internal energy.  For martial arts, it connects the legs to the upper body.  As the legs become stronger, it adds power to your kicks.  Having leg strength will enable you to move quickly, with the feeling that you have springs under your feet.  At a higher level, the practitioner will develop ground force.  He will only have good ward off force when he has built up leg strength.  In our system, we say, “If you don’t have legs, you won’t achieve a high level of kung fu.”  This leg training is one of the keys to developing traditional martial arts skills.

The practice of Wu Dao Gong has many levels and will always challenge you.  However, the journey is very enriching.  Many students have commented how much stronger they are physically, mentally and emotionally.  People who haven’t seen them for some time are also surprised and amazed by their progress.  Through the training, the practitioners gain confidence in themselves and in their abilities to deal with life’s difficulties more effectively.  Gradually, the training becomes a way of life, having a positive influence on our thoughts, emotions and spirits.  We wish all students every success in their endeavour to develop and master themselves through the art!